In November 2022, AFCA will have been operating for four years. In this time, we have grown and matured rapidly, and worked hard to ensure fair and timely processes and outcomes for all parties involved in complaints.

It was pleasing to see complaints involving financial difficulty decrease to 4,442, but in the coming year, AFCA will be working closely with industry and consumer groups as we monitor the impact of cost-of-living pressures and higher interest rates and repayments.

The flooding and storms that have taken place along the east coast of Australia over the last six months have significantly impacted many communities in New South Wales and Queensland. Of the complaints lodged with AFCA in the last year, more than 1,500 were related to natural disasters, which is more than double the complaints from such disasters in the previous year.

Of concern, there has been a 54% increase in complaints about general insurance claim delays (from 3,126 in 2020–21 to 4,804 in 2021–22) both a direct and collateral result of natural disasters putting pressure on the industry’s resources.

Other areas of focus for AFCA are the growing number of disputed transaction complaints, including scams and complaints related to emerging products and services such as cryptocurrency and buy now pay later.

AFCA received 4,131 scam complaints during the financial year ended 30 June 2022. On average, this is around 340 a month, which is up 17% on last year. It’s not just the volume of complaints involving scams that’s increasing, but also the sums involved.

We are seeing scams resulting in losses of over a million dollars and often beyond our jurisdictional limit, particularly in relation to investment and romance scams.

In the cryptocurrency space, we received only 198 complaints and closed 204 complaints (complaints closed included those received in the previous year). However, this is because cryptocurrency is not a regulated financial product under the Corporations Act. Some providers have chosen to be members of AFCA voluntarily, or have joined as a condition of membership of an industry association. We expect complaints in this space to rise as more consumers use this product, and more crypto providers become members.

We are also expecting an increase in complaints about the provision of buy now pay later payment options. Buy now pay later is generally not considered to be ‘credit’ under existing legislation. This means the provision of these services, and membership of AFCA in relation to them, is voluntary. AFCA currently has 10 financial firms identified as belonging to this category.

AFCA received 1,064 buy now pay later complaints in the last 12 months. We expect that with the rising cost of living and inflation, more people will access these products, which may see an increase in complaints in this area.

In the 2021–22 financial year, we excluded 8,282 complaints as being outside AFCA’s jurisdiction. The majority of these complaints (77%) were excluded on the basis of a mandatory exclusion.

The most common reason a complaint was outside the Rules was because a financial service was not provided, with 2,414 (29%) complaints falling into this category. This may occur where the complainant incorrectly lodged against the wrong financial firm. Often, they have had a financial service provided, but not by the firm they selected.

In 2021–22, successful complainants secured more than $207 million in compensation and refunds. In addition, AFCA’s investigations into a range of systemic issues also resulted in remediation payments to consumers totalling $18,275,607.

As at 30 September 2022, AFCA has helped to secure $883.39 million in compensation and refunds since commencing operation on 1 November 2018. Over $250 million has also been refunded as a result of AFCA’s systemic issues work. 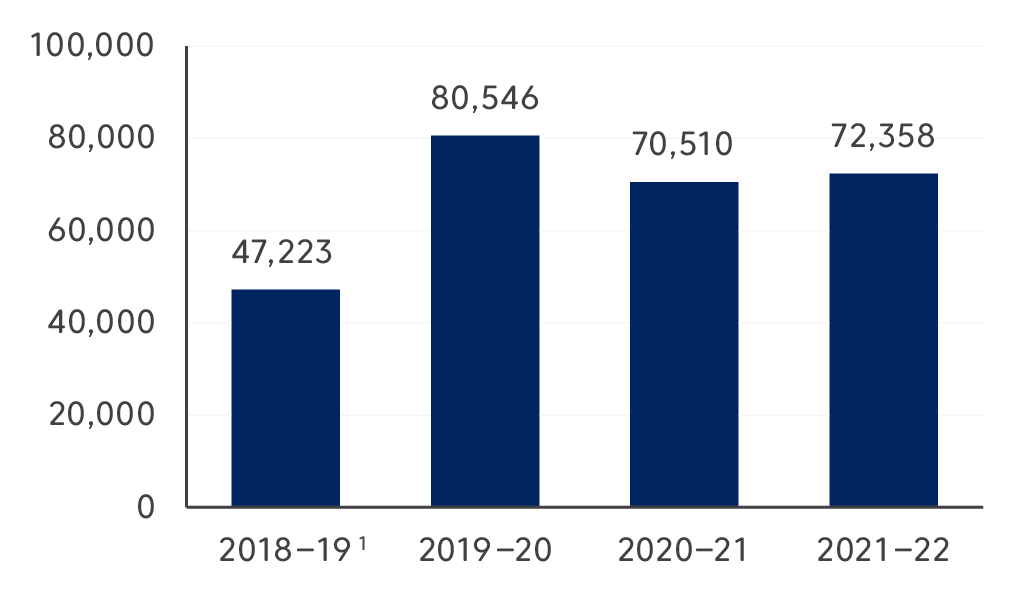 Top five complaints received by product and number of complaints

Top five complaints received by issue and number of complaints

Previous section - Who complained to AFCA?