44% resolved at Registration and Referral stage 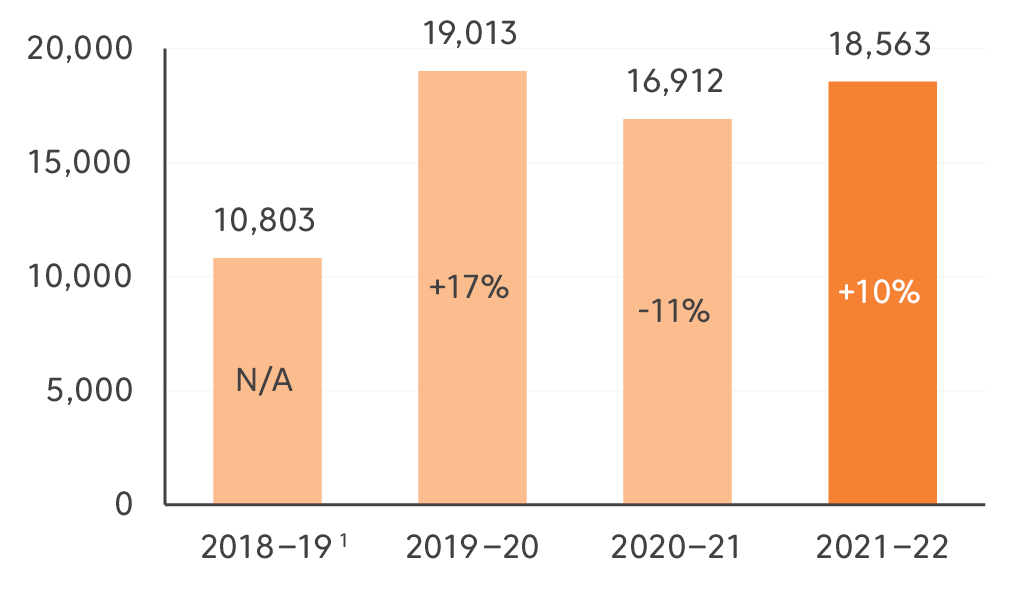 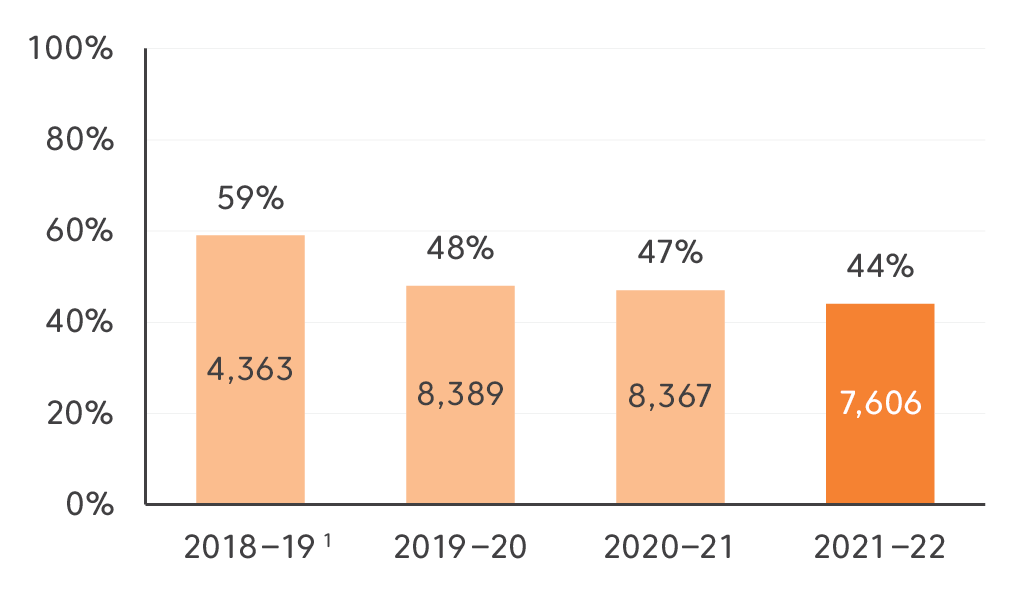 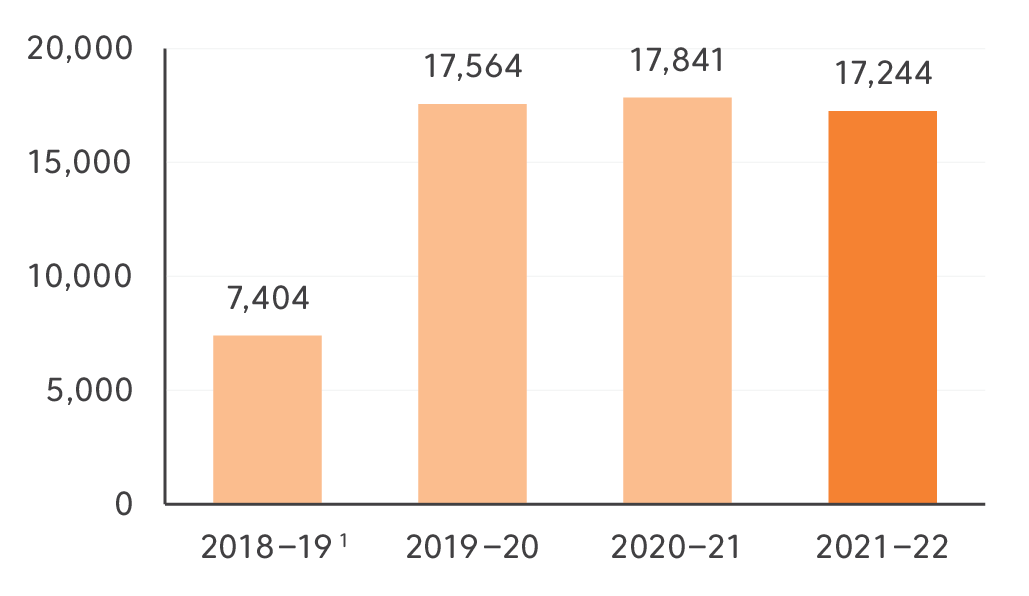 Average time to close a general insurance complaint in days 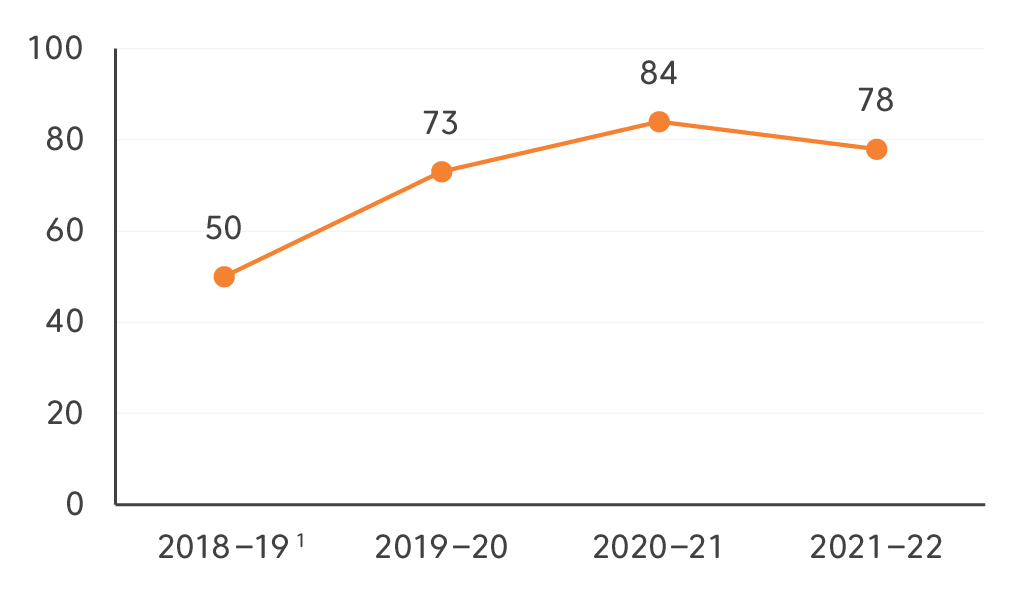 The general insurance products that AFCA can consider complaints about include:

During the 2021–22 financial year, AFCA received 18,563 general insurance complaints. This made up 26% of the total complaints received by AFCA.

The average time taken to close these complaints was 78 days, with 56% of complaints being closed within 60 days.

Delays in claims handling has been in the top three issues for the last several years, with an increase of 54% this year.

As well as the effects of significant and widespread natural disasters, delays in claim handling have been affected by a range of environmental, economic and sector specific factors including:

Insurers’ responses to natural disasters also meant that home building insurance was in the top five most commonly complained about products this year, with a very large jump of 74% in complaints. We also saw a 30% rise in complaints about motor vehicle insurance.

We acknowledge that insurers are facing challenges as they try to manage claims and get people back on their feet following natural disasters. We know there are significant issues with the supply of building materials, parts and labour because of national and global events outside their control.

However, we are concerned about the rise in complaints being escalated to AFCA. We are particularly concerned when an insurance claim has been lodged with an insurer and the consumer comes to AFCA because there has been no contact from the insurer. We want to better understand the causes of these complaints and we are working with insurers to help them resolve disputes more quickly and, ultimately, to prevent them. We encourage firms to explore ways to lift the resolution rate at Registration and Referral above 44%.

We promote early resolution at this stage, if the outcome is fair for both parties, because it’s efficient and cost-effective for firms and it helps takes away anxiety and uncertainty for complainants.

We urge insurers to be proactive and innovative in resolving complaints early, including by communicating regularly and effectively with their customers about delays in claim finalisation.

By prioritising resources, support and training for claims and complaints teams, insurers can help their customers and communities get back on their feet. An effective focus on vulnerable customers by directly addressing their needs will both help people resolve their claims and potentially reduce the number and duration of complaints.

In 2022–23 AFCA will expect insurers to increase their early resolution outcomes and change practices to reduce complaints about service and delays.

The complainant lodged a claim with their insurer for storm damage. The insurer partially accepted the claim. However, it denied aspects of it as they were not caused by the storm.

The parties also disputed the scope of works required for mould remediation and the additional building repairs. The complainant also sought compensation for her claims experience.

The panel that made the decision found the insurer’s expert’s initial assessment of damage was not thorough and likely caused some delays.

The insurer may also have contributed to the loss by not conducting any remediation or drying. This no doubt caused stress and inconvenience to the complainant.

The panel accepted the insurer had taken further steps to engage other experts and had overall assessed the claim correctly and fairly.

The insurer had already offered to waive the $1,000 excess applicable to the claim under the policy. The panel decided that, in addition to waiving the excess, and in view of the initial stress and inconvenience caused, the insurer should pay the complainant $1,500 compensation for non-financial loss.

There was no record of extended periods of inaction by the insurer. Available information showed the insurer’s claims assessment company made numerous attempts to contact the complainant and arrange re-assessment. It also showed different trades/experts were appointed to determine the extent of loss/damage to building and contents from the claimed storm event.

As the available information did not show the insurer handled the claim unreasonably, no compensation was awarded.

AFCA uses expert Panels to make determinations about particularly complex complaints we receive. Panel members are appointed by the AFCA Board based on their objectivity, qualifications, experience and relevant personal qualities.

Each panel that is formed to make a determination will normally have three members – a Chair (an AFCA Ombudsman), an industry representative and a consumer representative.

AFCA has received a large number of complaints about claims under Business Interruption policies for COVID-19-related business interruptions.

Due to the important legal issues raised by these claims AFCA agreed to refer a number of complaints to the courts as test cases. The judgments in the test cases will inform how AFCA deals with the legal issues in these complaints.

Under the AFCA Rules, a financial firm must seek AFCA’s consent to bring a test case about a matter that would otherwise be handled by AFCA as a complaint.

AFCA cannot initiate its own test case and, once it provides approval to the financial firm, it is not involved in the filing or running of a test case or any appeals. AFCA does not provide any financial, legal or other support.

One of the factors considered before agreeing to allow a financial firm to treat a complaint as a test case is whether there are important issues of law to be decided.

In addition, the financial firm must meet AFCA requirements, such as agreeing to pay the complainants’ legal fees incurred in the test case.

A test case 1 considering the application of a common insurance policy exclusion relating to the repealed Quarantine Act 1908 (Cth) was heard by the NSW Court of Appeal on 2 October 2020.

The main purpose of the test case was to seek a decision from the court on whether, in policies issued to small businesses containing Business Interruption cover, references to a quarantinable disease under the Quarantine Act 1908 (Cth) should be construed as a reference to a listed human disease under the Biosecurity Act 2015 (Cth).

On 18 November 2020, the NSW Supreme Court of Appeal ruled that references in policies to the Quarantine Act did not exclude the two claims in the test case.

The Board of the Insurance Council of Australia (ICA) applied for special leave from the High Court of Australia to appeal the NSW Court of Appeal decision.

On 25 June 2021, the High Court denied this application for special leave to appeal. You can read the Insurance Council of Australia’s statement here: insurancecouncil.com.au/resource/statement-on-special-leave-application.

A second test case 2 seeking judicial guidance on the application of particular policy wordings found in many Business Interruption policies, in relation to the COVID-19 pandemic was launched in September 2021. The Full Court of the Federal Court of Australia delivered its judgment in this case on 21 February 2022. 3

Applications for special leave to appeal to the High Court of Australia were filed by some of the parties about aspects of the judgment of the Full Court. The option to appeal the court’s decision was included in the original test case arrangements.

AFCA was not a party to the test cases and will await the High Court’s decision about whether it will grant special leave to appeal.

AFCA will remain in communication with policyholders and insurers about the status of their complaints.