Australians in dispute with banks, insurers, super funds, investment firms and financial advisers lodged 70,510 complaints with AFCA over the past 12 months. A total of 73,928 complaints were resolved by AFCA this year.

Overall, complaints were down 12% on 2019–20, which was a year that included the initial months of the COVID-19 pandemic and a spike in complaints in areas such as travel insurance and superannuation.

Many complaints were resolved in favour of the financial firm. More than $240.5 million in compensation and refunds were also given through the resolution process in 2020–21 to consumers and small businesses, as well as outcomes such as fee waivers, debt forgiveness and apologies.

In addition, AFCA’s investigations into a range of possible systemic issues resulted in remediation payments to consumers totalling nearly $32 million in the past financial year.

AFCA has now helped to secure almost $660 million in compensation and refunds, and over $220 million 1 in remediation payments, since commencing operation on 1 November 2018.

Speedy resolution of complaints continues to be a priority for AFCA, with processes designed to support all parties to a complaint to reach an agreement as early as possible.

Fifty-six per cent of cases were resolved within 60 days. On average, complaints were resolved in 88 days. This includes the referral back timeframe, which varies from 21 to 90 days depending on the product and/or issues raised by the complaint.

Complaint trends remained similar to previous financial years. The majority of complaints lodged with AFCA in 2020–21 related to banking and finance (60%). The most complained about product in 2020–21 was credit cards, accounting for 14% of all complaints, followed by home loans (9%) and personal transaction accounts (8%). With credit cards, the most common issues were default listings and unauthorised transactions – the latter accounting for 11% of card complaints.

Around a quarter (24%) of all complaints lodged with AFCA were about general insurance, the same as during the previous reporting period. Seven per cent of complaints with AFCA related to superannuation (down 2% on the last financial year), 6% were about investments and advice, and 2% were about life insurance (both the same as last year).

Government support, business relief measures and a steadying economy had a positive effect on complaint levels in 2020–21, including complaints involving financial difficulty.

Significantly, complaints involving financial difficulty were down nearly 40% from the numbers AFCA saw the previous year. This is a great outcome and reflects the positive response from government and industry to the impact of COVID-19.

The past 12 months included 165 complaints related to insurance cover held by small businesses for business interruption associated with COVID-19. More complaints are expected in the coming year, once the second of two test cases brought by the insurance industry is resolved.

Travel insurance complaints were down 22%, as Australians stayed at home, and superannuation complaints went down 31%, after a jump last year when the government allowed the early release of super at the start of COVID-19.

There’s no single reason for these increases, but people transacting online more during COVID-19 will have contributed. Scams, which have accelerated during the pandemic, are also leading to increasing complaints about transactions.

The data in this Annual Review has been classified by product type.

The product types are:

For more information on how we classify complaints refer to Appendix 1. 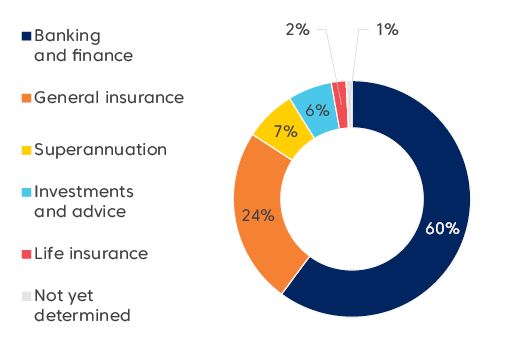 More than $240.5 million 4 in compensation was awarded or obtained through AFCA

72% of complaints resolved by agreement, or in favour of complainants

Average time to close a complaint was 88 days

Average time to close a financial difficulty complaint was 86 days

Stage at which complaints closed 5

1 One complaint can have multiple products.

2 One complaint can have multiple issues.

4 This includes matters previously received by AFCA’s predecessor, Financial Ombudsman Service, and resolved by AFCA between 1 July 2019 and 30 June 2020.

5 Percentages have been rounded and, as a result, do not total to 100%.

Previous section - Who complained to AFCA?